Home›LIFEHACKS›Why I'm happy when my friends move away

I was devastated the first time a good friend of mine moved away. I don’t know how old I was, but I was young enough to still be in elementary school. It was my best friend. Best Friend in the sort of way where we had ridiculous inside stories we made up, like the one how we both fought in this ridiculous junior karate championship. We always knew which Teenage Mutant Ninja Turtle the other called dibs on. We were definitely Best Friends.

When he told me he was moving, I was crushed. My parents were nice enough to arrange a Last Play Date sort of deal. There was the zoo, some burgers, and I think a plan of going to the movies and then a sleepover before my friend left town the following weekend. Sure, it sucked that he was moving away, but at least we were going to have one last epic blowout before it happened.

Wait, that’s not what really happened. After Most Epic Play Date Ever my parents asked his parents why they were moving out of New York. Soon to be Former Friend’s parents had no idea what my parents were talking about. Turns out my Soon to be Former Friend lied about the whole thing. They were not getting ready to leave New York City. Needless to say, we’re no longer Best Friends.

Let’s try this again! I’m trying to remember the first time a very good friend of mine moved away, but that part of my brain is still too pre-occupied with the asshole who lied about moving away when I was a little kid. As a consolation prize for that exact memory, I can say that whenever I learn a good friend of mine is moving away, I’m pissed. It sucks to lose friends. I don’t care what you say about well now with technology it’s easier than ever to keep in touch blah blah blah blah blah! If I can’t randomly run into you during the weekend because it’s been arbitrarily too long since I’ve seen you, you occupy a different space in my heart when it comes to friends.

I’m a tactile person. I don’t mean to be bad at communicating with people and keeping up with people. I just can’t do it. Those who I’m most invested with are those who I see on a frequent basis. This has some drawbacks, and for the sake of this article, the most relevant one is I’m a wreck whenever someone moves away. I’m usually that guy at the going away party who insists that if I get the soon to be departed too drunk to drive or fly, they’re contractually obligated to not move away. This maneuver has yet to work, but as far as I’m concerned I’m just perfecting my form for when it really counts! 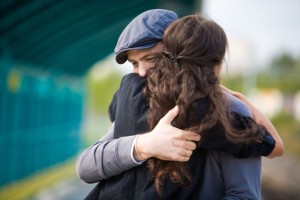 Recently I’ve become less of a wreck when I learn my friends are moving away. Not only have I become less of a wreck, I’ve even found myself being happy with my friends’ decisions. I was in Portland, OR, catching up with a friend I hadn’t seen in years, another friend who had moved from New York years ago and I had only seen once since, and a friend who was in the process of leaving New York for Portland. I was full of emotions (plus fried crispy pig ear and some of Portland’s finest local brews!) when I realized what a unique and amazing position I was in. I was catching up with friends whom I hadn’t seen in years and at the same time preparing to say goodbye to a friend who I was used to seeing all the time. It was a strange crossroad of interacting with nostalgia, and seeing another close person in my life drift into that warm sea of nostalgia. But what really struck me was that when seeing friends I hadn’t seen in years, how easy it was. How our conversations were effortless, and it almost felt like it didn’t matter that we hadn’t heard or seen from each other in months, if not years.

Those conversations were filled with a kind of intensity and urgency that for me, just isn’t present with a lot of people I see or speak with on a regular basis. This isn’t an indication of how I feel about these people, or that our conversations are somehow unfulfilling, but it’s the difference between a diffusion or collection of energy. With anyone I speak with on a regular basis, the story is more or less the same. It’s the same update on our jobs, life goals, the Rangers, etc. The conversation remains more or less the same even when the day has changed. Again, this isn’t to say that these conversations aren’t important or interesting, but eventually these things feel more like chatter than they do anything else.

For whatever reason, when seeing people whom with I knew time was at a premium, the conversations were different. There was no time for small talk, no need to discuss frivolous matters like who dislikes their job for what reason. We talked more about the larger narrative arcs of our lives. Where we’d been recently, where we hope to get to in the future, and what’s getting in the way of us getting there. Was this significantly different than the early evening happy hour vent session? Not especially, but maybe we just did a better job of listening to each other because these were stories we hadn’t heard before. This sort of honesty in a way made it easier to talk with these friends than those who are more intertwined in my day-to-day life. When so many people know so many people, there’s always politics involved. Saying one thing is really saying a few things (and sometimes about other people) whether it’s intentional or not. Having friends who see things at a distance gives some clarity to situations, or at least the freedom to speak more freely about them. When I had to say goodbye to my friends whom I hadn’t seen or spoken with in years, I was sad. I had no idea when I’d see them again, and they’re definitely people I’d like to see more often than once every few years. But beyond just being glad to see them, by catching up with them I was able to look at my life with some clarity that I don’t usually get back at home. Perhaps feeling put on the spot by seeing people who I see so infrequently allowed me to look at myself with a new type of honesty.

I’m no good at communicating with people I don’t see on a regular basis, I’m pretty sure I’d make an awful pen pal, and I’m never the sort of person to randomly pick up the phone to catch up with someone I haven’t spoken with in a while. But when I’m traveling out of New York, I’m always happy to see a friend who has left us for greener pastures. I’m glad to see with a little time, space, and perspective, I’ll have a different take on their life, and maybe they will on mine.