Home›LIFEHACKS›The Sarcasm Diet: The Time I Stopped Using Sarcasm For An Entire Week

Sarcasm is my mother tongue. I’m willing to bet that whatever my first words were, I said them with at least the slightest tinge of sarcasm. I mostly blame New York City, a place where everyone is snarky, and more than happy to give you their sass before they give you their honesty. I have no recollection of when I first learned about sarcasm. At some point, I must have realized that if I said the opposite of what I really meant, I could make myself feel smarter by making others around me feel dumber. From that fateful moment on, sarcasm has been one of my favorite tools in my toolbox of rhetoric.

While I can’t remember when I first learned about sarcasm, I can remember when I tried to unlearn sarcasm. It was years ago, when I had finally begun traveling abroad, and my sense of self and my relationship with the world around me was growing and changing. I found myself in Israel, traveling in a bus full of young adults like myself, all visiting the country for the first time and trying to soak it up as much as possible. We all brought different things with us on the journey. Our experiences, our pasts, our personalities. I, of course, being the only native New Yorker in the bunch, felt it was my duty as the representative of my city to bring my sarcasm along as well. 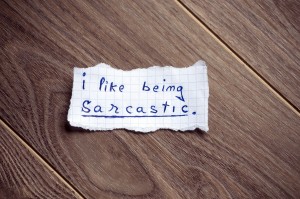 In a medium-sized group caravanning around in a foreign country, it’s natural for people to buddy up. My buddy was a girl who hailed from Buffalo and had moved to New Jersey for college. She smoked cigarettes, had no time for bullshit, preferred quiet solitude over loud crowds, and suffered no fools. We hit it off. While most of our group ran off to get drunk or were being loud during our tour stops, we usually sat apart, having those heady sorts of conversations that people have when they’re traveling in a country they’d never visited before.

Then one day, the group was traveling somewhere. I don’t remember where we were, or what we were doing, or whom else I was talking with. But someone within earshot said something that I just needed to make a sarcastic remark to. So I did. I don’t remember what I said, but I’m sure it filled me with that odd sort of joy that any well-delivered comment of sarcasm provides. Then, my friend very stoically said to me:

I can never tell if you mean what you say. You’re sarcastic about everything.

Nine times out of ten, if someone said that to me, I’d just respond with some sarcastic remark, obviously. But that time, maybe it was the traveling, maybe it was being surrounded by all those people I didn’t know, maybe it was because the person who said it was someone who in a short period of time had earned my trust, but I took the comment to heart. I really stopped to wonder how I was presenting myself to those around me. I considered that maybe having sarcasm be a regular part of my rhetoric since before I could remember, might not be a good thing. I decided to run an experiment on myself: I was going to stop using sarcasm for the rest of the trip. I had about a week to go, and I was confident I could get through it without using any sarcasm at all. I figured I’d just find other ways to be clever or witty, but I had no idea what I was getting myself into.

Initially, when I had the urge to say something sarcastic, I stopped myself and found another way to express whatever sort of snarky comment was in my mind. So while I denied myself the ability to use sarcasm, I was just finding other tools to do the job. Think of it as cutting a piece of food with the side of your fork because you can’t find a knife. While my sarcasm was no longer verbalized, my sarcastic thoughts were definitely still there.

This period lasted for a while, but as time went on, whenever I paused to keep myself from saying something sarcastic, I automatically began asking myself: What do I really mean, and what am I trying to express? The more frequently I asked myself this question, the more I found myself thinking genuine thoughts. The things I wanted to express were less and less about trying to make a cheap laugh or zesty remark at someone else’s expense, and instead were genuine emotions that I thought about any given thing.

Eventually, that automatic question didn’t even fire anymore. This space in my brain which weirdly had always been occupied by sarcasm, and non-genuine thoughts that are created due to sarcasm, fell away. In an odd way, I feel like this made me a better person, or, at least, a person with a lot less attitude. Everything I said, did, and even thought, was much more considerate in terms of wanting and generating genuine emotions for myself and the people around me. I was happier, I was calmer, I felt my entire mind settle down as I was much more open to just accepting things as opposed to judging them with the intention of manipulating them through sarcasm.

By the time I left Israel, I had changed in many ways. I made a lot of new friends, saw a part of the world I had never seen before, and I was filled with a sort of zen that comes from being on such a journey. One of the best parts was that I successfully made it through my break from sarcasm. From the moment I told myself I wouldn’t be sarcastic to the time I got on a plane heading back to New York, I wasn’t sarcastic a single time.

Of course, this all changed when I got back home. What happened when I returned was perhaps the strangest and most unexpected part of this experiment. My job at the time was a retail job with a bunch of guys around my age. Meaning, a bunch of guys who would regularly sling verbal barbs at each other like it was part of their daily duties at work. I remember my first day back, and wanting to get back into it, and I couldn’t. I had forgotten how to be sarcastic. Whatever muscle I had built up over a lifetime, I managed to destroy in a week. It felt like when my leg falls asleep, all prickly and almost phantom to my body. Like, I knew what sarcasm was, I understood the formula of how it was supposed to work, but I couldn’t get that part of my brain to operate how I wanted it to. I was actually sort of happy about this at first. 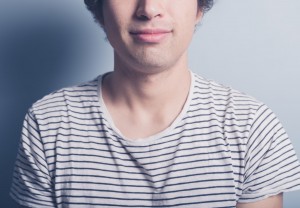 Years later, I am back to my usual sarcastic self. I can’t help it; it’s who I am. But taking a break from sarcasm made me look at it differently. One, I think that if you use sarcasm regularly, it does impact how you think. How could it not? The very nature of sarcasm is to say something that means the opposite of what you mean. That is the very opposite of what it means to be genuine. Sure, you might not be sarcastic about everything, but allowing yourself to think in non-genuine terms on any sort of basis can hinder your ability to be truly genuine about anything. The more obvious thing I came to think about a lot was, sarcasm is rude, plain and simple. Whenever we’re sarcastic to someone, we’re making a judgment that that person, or whatever we’re responding to, isn’t worth our genuine thoughts and emotions. Sure, this isn’t the worst thing you can do to someone, and it’s certainly something we’ve all been socially programmed to do, but that doesn’t make it a good way to treat other people.

Sarcasm is delicious. It’s delicious in the same sort of way anything bad for us is delicious. It’s fun, it’s zesty, and it’s great with friends. But it comes with its faults. Using sarcasm too often can make us sharp, make us mean, and make us insincere when we don’t even mean to be. By all means, continue to use sarcasm. I don’t expect anyone to give it up overnight, but I would suggest taking some time off from it to see how you look at the world differently.