I was sitting in one of my classes that I had to take for my bachelor’s in organizational management, and I remember the instructor saying, “Midlife is considered to be at the age of 35 . . .”That’s impossible, I thought. I certainly didn’t want my classmates to think I was old. I was coming up on my mid-thirties while everyone else in the class was probably in their mid-twenties.  I thought, half of my life can’t be over. Not now. I’m just getting started.

We have all faced various difficulties in different ways. Some of us have lost our homes, our careers, our self-esteem, and even our self-respect, and feel we have reached an age where “no one will want us because of our age.” But who has the right to determine that we’re too “old?”

As I watched an episode of Shark Tank, one of the entrepreneurs, John Paul DeJoria, was a guest on the show, and I soon found out that he was once homeless. He became part owner of the Paul Mitchell line of hair products with just $700, and later, the Patrón Spirits Company as well.

He reinvented himself. He was reborn in his new path in life. He decided to make a change in what he was doing to become a better version of himself.

Recently, a very close cousin of mine was going through her own relationship issues with a man she had been with for 8 years. They were engaged, and she had bought a house with the idea that she and her someday husband would live in it together and continue raising their children (and maybe someday their grandchildren) there.

On a visit to celebrate her 50th birthday with me, she was very distressed about her current living situation and her life at that point in general. She wasn’t sure what to do next.  Her career seemed unstable but consistent, and her love life had been slowly diminishing. No matter how many talks she had with her fiancé, he didn’t seem to be listening to her or understanding how she was feeling.

I asked her some simple questions. What do you want to do with the last half of your life? What would make you happy now? What is going to make you happy later? What difference would it make if you did nothing about it versus doing something about it?

She sat there and really thought about what I said. To be honest, I was shocked that she did. She even wrote out a list of things that would make her happy both now and later, and what would happen if she did nothing versus something, and she realized that she did have time to do a lot of the things that she had stopped doing.

She ended her 8-year relationship with her fiancé that was going nowhere, she reinvented her job position so she became more valuable to the company, and she started dating a younger guy.

Often, we really need to look at ourselves from the inside out and not play to the standards of the game of life.

As a child, you’re often told you should finish high school, go to college, get married, have kids, raise them, and retire. At least that is what I was told, and in fact, that is exactly how my parents did it.

But we are living in a new world. Technology changes monthly, if not weekly. We carry our phones with us and we can communicate with anyone, anytime, anywhere. Change happens on a daily basis. Therefore, we have to find new ways to reinvent ourselves in any way we see fit. We are living longer, kids are smarter today, and senior citizens are more active at what we consider retirement age than ever before. In fact, social security is even starting later.

So why do we still say that midlife is at the age of 35?

I think “midlife” is really any point in your life when you can honestly sit back and say to yourself, what do I want to do with the last half of my life? Whether it be at 35 or 55, or whenever, only YOU can determine when you’re ready for your own midlife change. 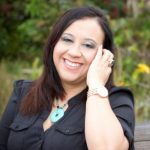 T.L. is a Puerto Rican native New Yorker from the Bronx. She recently published her first book, The Rainbows Inside of Me. She has enjoyed reading and writing from a very young age and also loves to sing. T.L volunteers with the homeless and works with various women’s Emmaus groups, Life Teen, and Edge. She hopes to encourage girls and women to develop their self-worth and understand that any obstacles they face can be overcome.

T.L. is a Puerto Rican native New Yorker from the Bronx. She recently published her first book, The Rainbows Inside of Me. She has enjoyed reading and writing from a very young age and also loves to sing. T.L volunteers with the homeless and works with various women's Emmaus groups, Life Teen, and Edge. She hopes to encourage girls and women to develop their self-worth and understand that any obstacles they face can be overcome.