I am a woman in comedy. To some people, this means a couple of things: 1.) I am a woman, and 2.) I do comedy. To some people, that is it, yet the well runs so much deeper than any one of those folks could imagine. As a woman in comedy, I see myself as being a part of a covenant, a sisterhood of women who show up every day to fight tooth and nail to be respected, understood, and equal in a male-dominated field. As a woman in comedy, I automatically support, love, and respect every other female comedian I come into contact with simply because I understand them (partly) and I feel they understand me (in part). Now, take every “woman in comedy,” replace it with “woman,” and it still works. Every field struggles, and that’s why, my allies in love, we must support each other.


Not everyone sees it that way. There are those who view other women as sisters and those who view other women as threats. Let’s take it back to comedy. There are those ladies who induct themselves into a sort of “sisterhood” who support, love, and honor every woman who steps onto the stage, regardless of seniority, status, or position in the community. They will view every female success as their success, and meet every female failure with empathy. Then there are women who will view other women as a threat will be jealous, skeptical, and unkind to other women in the community, viewing others’ success as their stolen opportunity. Of course, this behavior this goes past comedy. How many fights have been incited by a female friend “stealing” a guy? Or having said something that got misinterpreted to be an insult? As a female, if you don’t allow empathy and love for your fellow ladies you leave room for mistrust, insecurity and doubt. Yes, we are all insecure. Yes, we are all self-conscious. Let’s not tear down the women who are revolting against a society that trains us to constantly question ourselves, our bodies, and our voices; let’s instead celebrate them, thus giving ourselves allowance to do the same.

You may be thinking to yourself, “Hey Amy, I have great male friends. What about man love, you BIGOT?” Yes, sure, men have love too. Men can be great friends too. That is a WHOLE OTHER ARTICLE that you can look out for in my upcoming book, Dogs, Cats, and Other Things That You Can Force Your Friendship On (not a real book—yet), but that is not this article. I speak to female friendships because currently that is what I know, that is where I’m focused. I am focused here because as I age I am met with more and more resistance, ignorance, and bullshit, in part, because I’m a woman. There is something to be said about befriending another person who experiences the world in a similar way to you. There is also merit to befriending a German man named Vlad who steals cars for a living. But we’re not talking about that guy. Another woman can be that voice for you when you’ve somehow lost your microphone. When you question things like, “Why did this interaction make me feel ashamed of my body? Was that okay? Am I being harassed?” it’s very necessary to have someone there to validate your feelings and honor your voice; often times that will be another woman.

Sure, some women suck. They can be mean, conniving, bitchy, etc. Don’t be that woman. In fact, what if we looked at that woman with love and understanding? Realizing that deep down she is more terrified than anyone, a product of her environment; an environment that taught her she needed to compete with other women to lock down a man, or that there was a “right” way to look and act. Here’s the thing: all people, whether we choose to acknowledge it or not, are emotional, sensitive beings. If you take some time to understand that, you can befriend any one, especially any female. Sure, sometimes it’s more work than it’s worth, but in most cases it’s not. If you don’t have at least one true female friend, you are missing out on maybe one of the best things in life.

What a friend should be is someone who listens to you without judgment, someone who is there for you without question, and someone who isn’t afraid to let you know when you’re being a gigantic asshole. That means someone who loves you unconditionally, because you cannot have open, honest communication without unconditional love and you cannot have a healthy relationship without open and honest communication. A “frenemy,” someone who talks behind your back, doesn’t listen but waits to talk, can’t share in your successes, is not a friend and someone you do not need in your life. Look at it this way, you’re cutting away the dead leaves (sucky people) to make way for new growth (kind, nice loving people) and if they decide they want to change for the better, you can be open to letting them grow back in once they suck less.

Summarized, what I’m trying to say is: it’s hard out there for a pimp(ette). In times of struggle, strife, and doubt it’s a damn fine thing to have some people you can trust to lean on and in times of mirth it’s an even better thing to have a crew to celebrate with. Life is meant to be shared. We’re taught at a young age that the main spot is reserved for a man or a romance, but what if we made like Elsa and let that notion go? Try putting all your eggs in your friend basket for a while and see what happens with a relationship without the pretense of sex and attraction. It could be truly liberating. Because I’ve said it before and I’ll say it again, you cannot truly love another until you love yourself, and friends are the wind beneath your self-love wings. 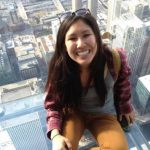 Amy Shank has been told that she has “one of those names you have to say in full.” Though she’s a long-time Bay Area native and enthusiast, she has lived and visited various cities across the country, and various countries throughout the world. Some of her favorite times were spent studying comedy in Chicago, theater in San Luis Obispo, and hilarious people in Europe. She believes a hefty dose of laughter a day is what’s kept her alive (goodness knows it is not her diet) and that within each person lies a universe. She’s an actor, dancer, comedian, writer, daughter, sister, and fast-food connoisseur; but most important of all, she is a human being figuring it out one day at a time.

Amy Shank has been told that she has "one of those names you have to say in full." Though she's a long-time Bay Area native and enthusiast, she has lived and visited various cities across the country, and various countries throughout the world. Some of her favorite times were spent studying comedy in Chicago, theater in San Luis Obispo, and hilarious people in Europe. She believes a hefty dose of laughter a day is what's kept her alive (goodness knows it is not her diet) and that within each person lies a universe. She's an actor, dancer, comedian, writer, daughter, sister, and fast-food connoisseur; but most important of all, she is a human being figuring it out one day at a time.