Home›LIFEHACKS›Self-Respect and Self-Awareness When Mentally Ill

I am crazy, to use the politically incorrect term. I am prone to visions and voices. I am also a parent, an educator, and an artist.

Every morning, I wake up, and the first thing I think is: Will I die today? But then I get up, and I go about my business, and I go to work.

Most people who look at me wouldn’t know that I live with mental illness. Not all mentally ill people are in my position, but most of us, the vast majority of us, hide in plain sight. We walk among the “normal” people, fitting seamlessly into society.

When I was younger, I was incapable of self-awareness. I was angry. I fought a lot and I had an active addiction. Somehow, with the help of people in my life, I learned the dignity of not imposing my disability on the people around me. It took many years of practice, but now, in my forties, I pass as “normal.” And now, in my forties, I have come to care little about fitting in.

One of my high school teachers told me that I could be as crazy as I needed to be, but I didn’t need to be a jerk. It is now my personal mantra. Don’t be a jerk.

Slowly, over the years, I have come to have a certain angle on myself. I have come to believe that I am human and fallible. I have certain talents and certain weaknesses. To become self-aware and eventually to come to have a modicum of self-respect, I had to develop the ability to look beyond myself, to see myself in the same light as the people around me see me. I have had to become aware of how my behavior affects others. I have also had to become adept at forgiving a lot of assumption.

Self-awareness is hard for anyone. But for those of us whose sense of reality is skewed by mental illness, we have to develop the ability to compartmentalize ourselves. Sure, the ghosts in the corner are scary, but they are just ghosts, and they cannot really hurt us. We have to tell ourselves that just because the voices in the world make us uncomfortable, we don’t have to listen. We have to step outside of ourselves and look at our behavior from a distance. It is hard, but it is possible. Most of us do it automatically. We know when we are not fitting in, and we do what we can to adjust ourselves.

Self-respect, on the other hand, is harder for us. We tend to think of ourselves in terms of what we see in the world. Mental illness scares and confuses the people in our lives. They walk away. They criticize. They belittle and make assumptions.

The line between self-aware and self-respect is wide. We have to give up on the notion of ever being like everyone else. We have to accept that our brains are different. Self-respect requires us to accept ourselves and to turn away from the darkness the world throws over us. We have to come to like, or at least, accept our differences. It is difficult and at times impossible.

Over the years, I have developed the ability to see myself as others see me and to reject outside perceptions. I have developed the ability to know simultaneously that I am perfect in this moment and that I need to continue to struggle to improve. The dichotomy is frustrating and problematic, but it is not only imperative for our mental health, it is necessary to live in a society that expects us to conform to normative thinking and behavior. We must embrace our disabilities and work to fit in. We must be both individual and herd-minded.

In order to do this, we must be aware of our own needs and the needs of people in the world around us, and decide which is more important from moment to moment. It requires us to stay constantly aware of what is happening internally and externally. We must be two people in one skin. Happiness and success lie in knowing which mask to wear and when.

Both self-awareness and self-respect require us to be brutally and often cruelly honest with ourselves. There is nothing wrong with us as people, but there are parts of us that are not acceptable for public consumption. Getting to this point is extremely individual. Each of us must adapt to our separate realities. What works for me does not work for you. The point of the whole thing though is to see. We must open our eyes. We must be courageous. We must be massive and minuscule simultaneously. We must see the world for what it is and for what we want it to be, and decide how we’re going to work to accept what is and to build what could be. 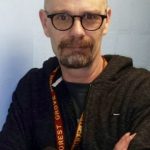 William was born November 5, 1969, and started writing in the eighties while incarcerated in a psychiatric prison. Since then his work has appeared in Main Channel Voices, World Audience, and Breadcrumb Scabs among others. In 2010, he was nominated for a Pushcart Prize. He has published several books. One collection of flash fiction, Girls, two collections of poetry titled Heroes of Silence and Heat Washes Through, a memoir titled My Name is Bill, and a novel coming out in 2015 titled Flesh and Bone. He earned both his BA and MFA in Creative Writing from Pacific University in Forest Grove, Oregon.

William was born November 5, 1969, and started writing in the eighties while incarcerated in a psychiatric prison. Since then his work has appeared in Main Channel Voices, World Audience, and Breadcrumb Scabs among others. In 2010, he was nominated for a Pushcart Prize. He has published several books. One collection of flash fiction, Girls, two collections of poetry titled Heroes of Silence and Heat Washes Through, a memoir titled My Name is Bill, and a novel coming out in 2015 titled Flesh and Bone. He earned both his BA and MFA in Creative Writing from Pacific University in Forest Grove, Oregon.