Being a hyperactive child is rather normal, but usually this hyperactivity fades away about the same time maturity rises. With some, that is not the case. According to the American Psychiatric Association, 5% of children have Attention Deficit Hyperactivity Disorder (ADHD).

As you get older, adults are less understanding of this disorder. They tell you to “grow up” or “stop acting out.” When really it’s something you’re not sure how to control. So instead of trying to help you, most teachers will send you straight to the principal’s office.

Dealing with people like that taught me quite a bit. Some teachers were very cautious of my feelings, while others were quick to embarrass me so I would sit quietly. I started doing sports and clubs so my energy was spent faster. These extracurricular activities also limited my time in the classroom, so that was a plus.

On assignments I was always one of the first to finish so that I could “use the bathroom,” but really, I would wander the halls until the class was almost over. I had good grades, so I was definitely doing something right. My teachers would get irritated that I could do better because I was so smart in their eyes, but they weren’t willing to grasp my creativity and help me run with it. Instead, they would give me an “F” if I doodled on my homework, or tell me to rewrite it if I added a funny note. The clubs and sports weren’t exactly cutting it. I needed an outlet. So I turned to music.

In high school, I lived with my dad and stepmom. Our house was out in the woods with an endless amount of walking space. Almost every day after school, I would grab my notebook, walk the dogs up to my favorite spot, and write. I came up with poems, songs, and stories. My wide range of creativity was flowing all over the place. I looked forward to writing every day—it was just what I was looking for. My performance in school the next few years had improved drastically. I was still getting in trouble from time to time, but not nearly as much as before.

At 18, I was finally taken to an ADHD specialist where I was diagnosed, and given the opportunity to get answers that I had been searching for alone. The amount of help I received from this is unexplainable. I grew up thinking there was something wrong with me because I couldn’t sit still. I had to make noise all the time, and my energy wouldn’t give in. It all made sense after that visit. I’m just as normal as everyone else.

ADHD in the workplace is a lot different than it was in school. It’s not tolerated in most cases. I had to learn when and where to say things, how often I could make a specific noise before the people around me got irritated, and that I work about 10 times better when I’m listening to music. My work pace is much faster than most. I get things done quickly and then I’m left with nothing to do but play around. To prevent the downtime, I started asking if I can help other people with their work. I’ll find tasks that no one else wants to do so that I am totally occupied. If there’s not anything I can help with, I’ll just start writing or finishing songs.

ADHD can be very confusing, but it’s not something we can’t control. We don’t have to silence it. We can use it to our advantage like getting a lot of work done quickly, or turning our creativity into forms of art. Find something you enjoy, something that is easy for you to focus on. Everyone is different, embrace that. At first, it seems like a huge disadvantage not being able to focus as hard as everyone else. Once we start understanding and accepting it as a natural part of us, life gets easier. 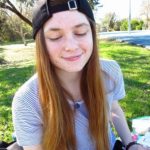 Kaitlyn began writing poetry when she was nine years old, and from that point on, knew that writing was for her. Her dyslexia and ADHD has not stopped her from pursuing her passions. When she isn’t putting pen to paper, she’s traveling, finding cool places to eat, or making music. She also is very supportive of the LGBTQIA community and is often raising awareness for everyone involved.

Kaitlyn began writing poetry when she was nine years old, and from that point on, knew that writing was for her. Her dyslexia and ADHD has not stopped her from pursuing her passions. When she isn’t putting pen to paper, she's traveling, finding cool places to eat, or making music. She also is very supportive of the LGBTQIA community and is often raising awareness for everyone involved.