It seems like everywhere you look there are ads on how to get the perfect waist, or get that “toned" body and now that summer is approaching it's definitely important to get that "beach body." The perceived notion of what you should look like isn't just in advertisement; it has found its way into a more treacherous spot: your friends and family member's minds. It's the backhanded compliment after not seeing a family member in a few months. It's that swift kick to the gut when your mom pinches your hips. Although I have no statistical data to back me up here, I'm sure 90% of women get my drift.

I knew I'd spend the majority of my life dreading the fat comments and seeking the skinny compliments, but what I was not prepared for was people telling me "don't get bulky." Hmm, don't get bulky. Now at this point in my life, the idea that someone is questioning if I am heading towards being bulky is an incredible compliment. It means I am finally getting something right in my training.

To most people, the perfect description of a woman in shape is being "toned." The gym bro, the gym rat, the meathead, all of these adjectives that have been tossed at us carry a very specific connotation and mental image—a man. If women happened to be in the gym it would be to attend the next Pilates and aerobatics class or hit up the treadmill. As for weights, let's head over to those 5 and 10 lb. dumbbells over there. All of these classes, all of the posters in the gym displaying women as completely toned and fit with a tiny 5 lb. dumbbell carry the subliminal message that as a girl there is not much you can do, so stick to the basics. If only I had known growing up that all the headlines on women's fitness magazines on how to lose 5 lbs. in a week and get washboard abs were all a myth. If I wanted to truly be in the best shape of my life, it was not going to be through those mechanisms alone. I was going to have to ditch the Barbie weights and lift some serious weight.

Had I seen more women in the weight room, I would not have walked out defeated with tears rolling down my cheeks at my first gym experience. If the idea of a woman lifting like a man was more accepted the weight room would not have been such a scary place. And as many women have done, I resorted to something more simple and familiar. For the record, there is nothing wrong with cardio machines, they keep one's cardiovascular system well conditioned, but it has been used as the only mechanism through which women feel comfortable enough to exercise. Walking back into the weight room the next day was the beginning of my solo journey into the unfamiliar. Although I was fumbling for the right weight and questioned my form on every rep, I kept going back. As I developed a routine and stuck with a beginner's weight lifting program, I began to hear comments from people I was telling about my new hobby. The infamous saying that all Barbellas are used to hearing: don't get bulky.

First of all, women simply don't have the hormonal capacity to grow muscles to the size of a man without supplements. Secondly, in everyday tasks one is not picking up 5 lbs. If we want to talk about functional fitness, how functional is it to workout with 5 lb. dumbbells when your toddler weighs 20 lbs.? Or how about moving that box at work, or carrying the groceries up the stairs (one trip only!). Working out should be so you can handle physical tasks a lot easier, so why train to be weak? Thirdly, there is a difference between size and strength. Those amazing, shiny orange people on stage are bodybuilders. Those people train for size, and not necessarily strength. A bodybuilding woman is the mental picture that comes to mind when people think bulky. Training for strength is a completely different regime, both in training and in diet. Lifting heavy generally is used for the latter, to build strength. Strength does not equal size. I repeat, to be strong does not equal huge looking muscles. And lastly, if it is a woman's goal is to be bulky, let her be bulky! Back to the beginning of this post, the notion that a woman has to have a certain waistline and a certain frame means she should only take up a certain amount of space.

Take up space. Take up all the space.

It's a constant criticism I hear from women after someone snaps a picture of them or they are trying to sit next to another person. Something about being small and taking up space is an ugly mindset that has been instilled in us since we were girls. The idea of lifting weights and being bulky completely contradicts what we were told since birth. It is, however, a myth and a complete misconception. Don't be afraid to take up all the space you need, be bulky. Be muscly. Or don't. Just decide for you. No more Barbie weights, lifting heavy was not meant for just men. Women are human beings too, and humans are incredibly strong. 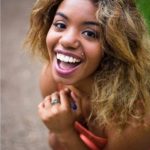 Alex is a Southern girl at heart. She was born in Albuquerque, NM, grew up in El Paso, TX, and currently lives in Austin, TX. She has a bachelor’s in sociology from the University of Texas at Austin and currently works in the field of law. She hopes to work in international relations some day because of her love for travel and learning of different people. She currently devotes herself to powerlifting training in hopes of one day making it to nationals and winning. Her life motto: Create your own happiness.

Alex is a Southern girl at heart. She was born in Albuquerque, NM, grew up in El Paso, TX, and currently lives in Austin, TX. She has a bachelor's in sociology from the University of Texas at Austin and currently works in the field of law. She hopes to work in international relations some day because of her love for travel and learning of different people. She currently devotes herself to powerlifting training in hopes of one day making it to nationals and winning. Her life motto: Create your own happiness.