As I have gotten older, I have had the chance to meet so many people. Some I instantly liked, others I knew I would never get along with. It’s funny that as you get older, making friends becomes so hard since you are no longer forced to be with anyone like you were in school. After I realized this, I looked at my old friendships a completely different way because I valued them so much more.

I have been so incredibly lucky in life to find groups of friends from different stages. In elementary school, I can fully admit to being one of the “uncool kids.” Instead of gossiping with the other girls, I was out there with the guys playing basketball, soccer, and kickball. The guys became my best friends, but then I also found a few girls, who like me, did not like picking on each other.


Somehow, we all clung together throughout the last few years of elementary school and on into middle school. Without them, I don’t know how I would have survived. Even now, those girls and guys are the ones I go to the most with my problems. They are the friends who made me, me, and know me like no one else does. Those are irreplaceable friendships that I know I will be holding on to for dear life for the rest of my life.

A few years later, another group of amazing people came into my life. I was extremely lucky in college because instead of starting over completely, my best friend (from middle school, go figure!) wound up at the same college I did. We did not room together which forced us both to get out there and meet new people, and boy did I ever! After reconnecting with one friend whom I had not seen in years, she introduced me to her friends who soon became mine. After that, nothing was really the same.

College is one of those times in which you create a family of friends, and I somehow found that. The huge group of people I became a part of was as wacky, crazy, and hilarious as you can get. We went on crazy adventures, picked on each other like siblings, and went through every bumpy time in college together. Most of us graduated around the same time, and knowing that we would never be able to have times like our college days again was one of the hardest things about leaving. But almost two years later, we are still as tight as ever, and I do not think that is going to change anytime soon.

Once you graduate from college, there are so many things thrown at you. Job hunting, moving, maybe even getting engaged or married can all be a part of the picture. With everything going on, it is extremely easy to forget your friends. I know I have done this over the past few months, and it has not been the best idea I ever had. I would say, “Oh, I will text them tomorrow and see how they’re doing,” or “They’re busy, they don’t want to hear from me right now.” This is completely the wrong attitude. It is in our craziest times that we need our friends, so the last thing we should be doing is forgetting about them!

And as someone who moved to a completely new city, my friends have been my biggest support system. I was lucky when I moved to New York that I had a group of friends already here, but they do not know me like some of my oldest friends. That is when I have turned to my friends from home the most since there is no replacing hearing your best friend’s voice on your phone.

Most of my best friends are 800 miles away so it can get pretty lonely up here, especially when it feels like the world is crashing down on my head. But no matter how far away we all are, distance does not erase our friendship. I can go a few weeks without talking to some of them when either they’re busy or I am, and when we talk again, it’s like nothing has changed. We are still our crazy, immature selves even with the added adult responsibilities we all have now.

So in today’s busy world, take the time to remember your friendships, old and new. Talk to the friends who you miss, even if you haven’t talked in forever. We can all make it on our own but with our friends by our sides, it’s just a bit more entertaining. 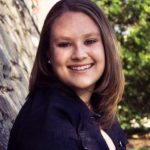 Megan is a 24-year-old from Winston-Salem, NC, who moved to New York City last August to pursue her dream job of being a theater journalist. After interning at several different publications in the city, she now is a contributing writer for ZealNYC.com where she covers theater, dance, music, and art stories. She graduated from Appalachian State University in 2014 with a degree in journalism and a minor in art history. And while she loves the bright lights of the Big Apple and exploring all the city has to offer, her heart will always belong in the Appalachian Mountains.

Megan is a 24-year-old from Winston-Salem, NC, who moved to New York City last August to pursue her dream job of being a theater journalist. After interning at several different publications in the city, she now is a contributing writer for ZealNYC.com where she covers theater, dance, music, and art stories. She graduated from Appalachian State University in 2014 with a degree in journalism and a minor in art history. And while she loves the bright lights of the Big Apple and exploring all the city has to offer, her heart will always belong in the Appalachian Mountains.