Home›Uncategorized›Jewish Christmas: Why This Pseudo-Holiday Means So Much To Me

Jewish Christmas: Why This Pseudo-Holiday Means So Much To Me


I used to be jealous of my friends who celebrated Christmas. Sure, I had Hanukkah, and I got my presents, but it wasn’t the same. Maybe it’s because more people around me celebrate Christmas than people who celebrate Hanukkah, or maybe it’s because there are always more Christmas decorations, television specials, and so on. I always felt like I was celebrating a second-tier holiday. I had Hanukkah, but I wanted something more!

Then, my family started getting into Jewish Christmas. You’ve heard of Jewish Christmas, maybe you even follow it with your own family or with your friends. It’s the tradition of Jews going to the movies and then out for Chinese food on Christmas Day. It’s a fun way for us to spend quality time with the family while so many other people around us are doing the same in observation of Christmas. For lots of people, Jewish Christmas is just about a movie and a meal. For me, this quirky tradition turned pseudo-holiday means a lot more to me, and I’m going to tell you why.

First, I think it’s fair to tell you that I’m not a religious person. As soon as I became old enough to get away from the religious upbringing my parents tried to bring me up with, I did. Religion has no place in my life. I respect that religion means a lot to a lot of people in this world, but to me, it has no particular meaning. Even after living in Israel for a year, I have no religious urges in my body. My view on religion can ultimately be summed up with this: If I wasn’t supposed to eat pork, why did God make pigs taste so good? If he’s doing it to judge me, I can’t believe in the wisdom of someone whose lessons come from being passive-aggressive.


Without getting too tongue-in-cheek, or stepping on the toes of those who are more religious than I, I can say that I don’t care much for religion because of how it has always been presented to me. There are tons of stories, ideas, traditions, and other things that are very old and are supposed to be very important to me for one reason or another. I have a hard time accepting things as being important because they’re supposed to be. This is part of why I don’t have any strong positive feelings for religion. But more personally, sitting down to the same holiday meals and telling the same holiday stories has little to no appeal. I can understand why people see beauty in taking part in a tradition that’s much larger than themselves, but for me, it doesn’t have the same appeal. I am always more interested in creating something than inheriting something.

Jewish Christmas is important to me because, within my family, it’s a tradition we made ourselves. Yes, I understand that we didn’t invent the tradition, but as a family, we have made our own traditions. We go to the same theater for the movie and go to the same Chinese restaurant for our dinner after the movie. Every year we argue about what movie to see (and within that argument there’s the other argument of who decided which movie the year prior, which movie is likely to be the better movie, and so on).

One of the things that I love the most about Jewish Christmas is that while it has its traditions, it’s also always changing. Every year there’s a new movie, and with every new movie there’s something new to talk about. No two Jewish Christmas dinners are ever the same because the main event of the day is always different. There’s no reading the same story I’ve tried to forget year after year, no reading religious texts that I honestly just don’t care about. Instead, as soon as movie release dates around Christmas get announced, I start prioritizing which movies I’m going to see on my own because of which movie I suspect my family is going to elect to see. 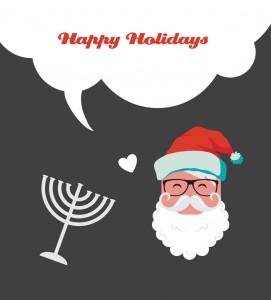 Really, the most important thing to me about Jewish Christmas is the tradition it has within my family. Like I said before, I’m not a religious person. While it’s something we don’t really talk about in my family, I know it’s a sore point for my parents. I’m sure they’d rather I be more religiously observant, and that the parts of Judaism that mean so much to them would mean something to me, but they also know they can’t force me. It’s created an awkward wedge in that part of our lives. I’ll take part in the larger family gatherings, and while I’m happy to see everyone, the religious ceremony means nothing to me.
Jewish Christmas, on the other hand, is my thing, more importantly, it’s our thing. It’s something we as a family have decided is important to us. It’s not important because our family did it before us, and their family before them, and so on. We don’t go to the movies because our ancestors did. We go to the movies and go out for Chinese food because we enjoy it, and that enjoyment has turned into a family tradition. And at the end of the day, traditions that are created by my family mean much more to me than ones that have existed long before I was alive.

So I don’t get Christmas. I don’t get that cozy morning filled with pajamas, hot cocoa, and a tree with a bounty of presents underneath. But I have Jewish Christmas. I have an excuse to go out to the movies with my family and eat Chinese food, and take part in something that we created. That’s the exact kind of holiday I want to celebrate!