I’ve never really considered myself a fearful person. I was always willing to take chances as a kid—jumping from swings onto unfolded cardboard boxes, learning how to do a front flip on the trampoline, explaining my elaborate make-believe games to friends. With those small steps into the unknown, however, there will inevitably be some missteps; bad landings that result in sprained ankles, or that one story too far that makes you look more weird than interesting. These experiences linger in the back of your brain and, the next time the chance comes up, you’re wary of putting yourself in that position again.

The more steps you take, the more missteps you accumulate.

At twenty-five, I’ve got a pretty long list going.

Now, I’ll admit, it’s probably not the end of the world that I’m not launching myself off swing sets anymore, but mistakes mature along with us, just like everything else. I’ve been disappointed and hurt by some of the people that have come into my life, and I’ve been the one doing the disappointing and the hurting; I’ve learned that good intentions don’t always lead to the right choices; and—this is the big one—I’ve come to realize that most adults are not the perfect people I used to think they were. Which means that there is no age when my life will suddenly come together, and I will never be bestowed with the magical ability to always know exactly how to solve every problem.

Which, you know. Sucks.

The only way we learn is by doing, but doing all this stuff blindly adds about a thousand bullet points to that list of missteps. I don’t know about you, but when something I do ends badly, it’s really hard for me to give it another go.

This is where the fear comes in.

Fear and I have gotten pretty close lately. It’s possible to have a good relationship with Fear. A lot of people do. In order to work together with Fear, though, you have to be able to set boundaries. I’ve never been too great at that. No matter where I am, or what I’m doing, be it driving to work or having lunch on my own, Fear is always there to remind me of the limbs I’ve gone out on. It likes to whisper things in my ear like this didn’t go so well last time or are you sure you can handle that again? I find myself just sitting on these thoughts for weeks on end, until they’re heavy enough to trap me in the comfort of my bed and far away from my responsibilities. Recently, though, I watched this video by Will Darbyshire, and it got the gears in my brain turning. So today, I’d like to talk through a few of the things I’m scared of, in the hopes that they might help you too.

Like I’ve said about a hundred times lately, I just moved across the country, and with that, comes a hefty fear of failure. I spent so long dreaming about moving out to Portland, and my path here seemed to fall into place so quickly, that I can’t keep myself from wondering okay, so when is this all going to fall apart? The thought of having to shove all of my possessions back into my car and drive back across America is probably the most terrifying thing I’ve ever had to worry about, and I’m honestly not sure that I would even be able to handle it emotionally.

That branches off into my fear of settling. The thought of strapping myself to some dead end nine-to-five job that I hate, working day in and day out just to get by, absolutely petrifies me. I have so many passions and so many big things that I want to accomplish, but I’m scared that they’ll have to get put aside in favor of paying bills and putting food in my fridge. I’ll be the first to admit that this particular fear is probably a little juvenile, but it’s there nonetheless.

It’s also what feeds my fear of wasting time. I have all these big things that I want to accomplish in my life and I start feeling guilty for every second I spend not working towards those goals because it just feels like there is so little time. It’s so easy to fall into a routine and I’m scared that one day I’ll turn around and realize that all I did was live the same day 365 times in a row.

All of this comes together to form my biggest fear: the fear of uncertainty. This one keeps me from doing little things like talking to strangers, to big things like accepting opportunities that could change my routine. When I’m in a situation that I don’t know how to operate in, I pull back into myself like a hermit crab under attack. I’m not good at flying by the seat of my pants. I like for things to be laid out, for there to be a plan that I’m following. The thing is, it is literally impossible to make a plan that covers every misstep I could make along the way, no matter how hard I try.

But fear is not an excuse for inaction.

Every single human being on this planet is afraid of something, whether they show it or not. We all have things that make us feel trapped, things that stop us in our tracks, things that shake us down to our core. The trick is to learn from those missteps and then get back on your path because mistakes are one of the most important parts of anyone’s history. Any good life comes with its fair share of cuts and bruises. It’s okay to take time to heal, and it’s okay if your steps are shaky for a while, just don’t let yourself stay down. There are beautiful things on the other side of your mistakes. 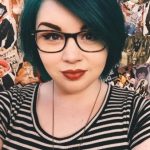