Home›Topics›LIVING›RELATIONSHIPS›A Hug Partner: The Relationship You Didn’t Know You Were Missing

One of the most important things any of us need, in any job, to be able to succeed, is a support circle. Maybe that’s a more dramatic way of saying established friend group at work, but that doesn’t make the claim any less true. Think about it for a moment. For roughly 40 hours a week, we’re performing the same collection of tasks, and during those 40 some odd hours, we might love those tasks, hate those tasks, want to throw those tasks out the window and hope to never see them again. So, it’s a natural thing to want/need people in our workplace we can lean on for support, whether it be practical or emotional. Sometimes, the best people to give us said support, are the people who understand exactly what we’re going through.

Every work environment breaks into smaller social circles. The people in your fantasy sports league, your office or cubicle neighbors, your work “husband” or “wife.” All of these are totally common interoffice relationships, ones that I see at my job every day. But I’ve got one that trumps them all: the hug partner.

Yes, a hug partner. One of my coworkers and I have made it a thing that we have to hug at the beginning and end of our respective workdays, every day. While there are tons of people I enjoy at the place where I work, and many people who I might converse with or hang out more with during the workday, my hug partner is probably my most important work relationship, and I’ll tell you why!

For starters, let’s get to how it all began. I’ve been at my job for a little under two years. About the time I started at my job, my hug partner had just come back to work after a death in the family. She was collecting hugs left and right, and I—a natural hugger—was more than willing to help her out emotionally any way I could. From there, our offices were close enough together that we kept running into each other, so we kept hugging. At some point or another, we made a pact that we would have at least two hugs a day: one at the beginning of the workday, and another at the end of the workday. At the time, I’m not sure if either one of us took it seriously or thought we would stay with it—for the most part we do, we’ve both called each other out for skipping out on hugs!—but it’s become a part of my daily ritual at work, and here’s why it’s become so valuable to me.

Nobody likes the beginning of the workday. You just had a commute that was probably annoying for at least five different reasons; the work emails are already piling up, and you know eventually something is going to go wrong during the workday. That’s why I’m glad that one of our hugs always happens at the beginning of the workday. It gives a pause between the hassle of getting to work and the hassle of the job. It lets me get a clean slate. So no matter how frustrating things on either end of my day have been (or are going to be), there’s something warm and friendly waiting for me as soon as I get to work. 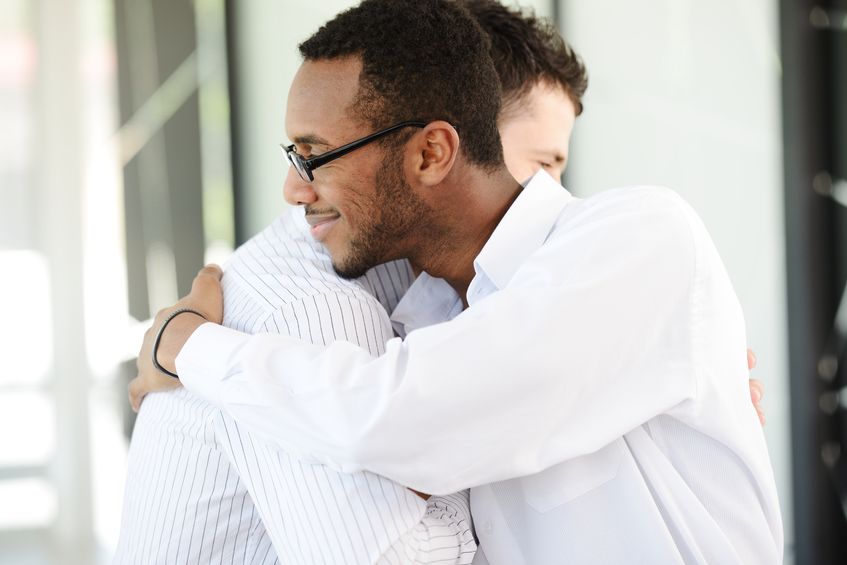 There are few things more fulfilling than the end of the workday, so you would think that the end of the workday hug wouldn’t be as essential, but it is! Sure, there’s always a small sense of victory that comes with the end of the workday, but that victory comes with a price. I don’t think anyone gets through a whole day without experiencing any sort of ups and downs, so I like having that last moment of emotional support before I leave my job. It somehow puts everything in perspective, that no matter what went my way or didn’t go my way during the day, I sort of stop thinking about it the moment I get that hug.

Besides the fact that these hugs begin and end my day at work, they’re extremely important to me for one reason more than any other: we are never, EVER, allowed to talk about work while we are hugging. No matter what time of day it is, no matter how crazy our workdays have been, we will never desecrate the sacred place of our hug with talking about work. Because of this, the hug becomes a real pause. While there might be—and in our case there usually is—a whirlwind of madness to deal with at work, for that little moment, it’s all gone. Because of this, we’re not addressing each other as coworkers who are stressed over an assignment, but as people who are distressed for one reason or another. It gives us a real break from the workday, even if it’s a brief one.

I can’t stress how important that is to me, and important I think it should be to everyone. One of the reasons friendships in the office are vital is because we’re galvanized by the same cause. We do more or less the same job and understand the pressures that come with our job. That’s good because it gives us common ground. The one drawback is it becomes too easy to always confide in these people about work. Sometimes talking about work is helpful because it lets us vent. Sometimes it’s harmful because it makes us keep thinking and talking about the things that are already driving us crazy during the workday.

My hug partner and I move beyond that. Yes, more often than not, the need for a hug during the day has been triggered by something that happened at work, but by not talking about the thing, we’re addressing the need for us as people to be emotionally supported, not us as workers, or employees, who have become stressed by a task. What we do, in our own little way, is put our emotional, human needs, above those as employees.

I totally understand if you find the idea of a hug partner a bit silly. We certainly get more than our fair share of looks and laughs from other coworkers of ours. So, if finding a hug partner is something you’re not comfortable with, I invite you to consider fostering this instead: Find an emotional safe space at work. Find someone who you can lean on for support and do the same for them. I don’t mean talk about work—in fact, I’d suggest you don’t—but just be emotionally available for each other when either of you is having a tough time.

Work is hard. Even when you love your job, having a job is never easy. Jobs get even harder when in the thick of a crisis, a heated moment, or whatever at work, we forget the fact that people—even ourselves!—are the ones performing tasks, and they’re not done on their own, or by emotionless machines. I think there’s also a trend in the workplace that it’s better to not be emotional, to hunker down, to do the deed, and so on. But we’re people before we’re anything else, and we’re filled with emotions, feelings, needs, fears, and anxieties. These things sometimes come to the surface when we’re at work, AND THAT’S OKAY!!!

So, find someone you can trust and confide in, who can be your calm from the storm. While it’s good that you and your coworkers go out for happy hour and vent about how lousy your days were, I guarantee that if you have someone at work that is simply emotionally there for you, your day will be even better! Either way, the sooner you have someone at work that can emotionally pick you up, the easier your work life will become. As for myself, I’ll just take a hug!